What would happen if we decided that the assumptions we made about medical practices could not be justifiably generalised to women. Would it cause us to throw out a lot of the medicine we use for women – if it’s all based on this assumption that was never proven?

I’m not arguing that we throw it out. I’m arguing that we study how useful is this? We don’t know how much of our evidence generalizes. And we should know that. If we are interested in studying human health. We actually need to study humans and the diverse populations they are composed of. We routinely generalize beyond data. After studying ten thousand people – we generalize the results of the trial for beyond that. We still act as if females are just smaller males. We treat the organs in a women’s body as if they’re just plug and play. We treat pregnancy the same way when, in fact, it’s a window into cardiovascular disease.

What do you mean?

You can think of pregnancy as a nine-month stress test on the cardiovascular system.

During pregnancy a woman might get gestational diabetes or gestational hypertension. These are likely to resolve after pregnancy when you don’t have the additional stress of the fetus in your system – and so it’s often treated as a resolved issue once the woman has given birth but it’s a missed opportunity. It would be an opportunity for us to have window to be able to look at how the woman is doing. The vast majority of women with gestational diabetes go on to develop diabetes eight years later. That’s a missed opportunity. We could have used when the woman got it during her pregnancy as a treatable moment.

Are you saying we don’t routinely include the fact that a woman developed gestational diabetes during her pregnancy when we look at a woman’s long-term risk of developing cardiovascular disease?

No – reproductive health is completely siloed from the rest of healthcare. The woman is seen over in obstetrics and then it’s treated as if you went and did this thing and now it’s over. It’s like you ran a marathon and that was that. You’re back to being ‘normal’ again and we’re not going to incorporate it in your patient file. Although we could and should flag it and track it. It’s a highly teachable moment. When you’re younger you have an immediate desire to be present and healthy for ten, twenty years for your child. So one possibility is while you have this person with a concern for how am I going to make this all work and stay around and be healthy. One possibility is that you help make the case that it’s going to be more important in your life to incorporate these behavioral changes. It would be consistent with the ways we do other types of medicine. 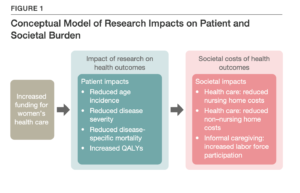 Why do we think of cardiovascular disease as a male disease?

Men were dying of heart attacks. That’s what was visible. That was the concern. There were odd theories like if women went into the workforce they would have heart attacks like men. So they defined the case on the visible part of the problem. They defined the diagnostic approach, the levels of intervention but that doesn’t mean that’s the disease that just means that’s what you see. We did the same thing for ADHD. It wasn’t that girls didn’t have the problem it was just that it wasn’t as visible. They didn’t act out in the same way. It’s the same thing with men and heart attacks. We saw men dying of heart attacks so that’s what we built the model on. The problem is: women have far, far higher rates of ‘silent’ heart-attacks. They’ve usually sought care a lot of times before their heart attack and it’s dismissed – because our diagnostic measures don’t reflect the way women’s heart attacks manifest.

We’ll learn a lot more by studying diverse populations. If you believe that it’s always been okay that we studied men, that it was good enough, this has worked – not a problem. Let’s just take thirty years – study women and generalize to men – while we get more information, because we will learn more by studying women than men, and even it out. If you have a problem with that answer than your first response wasn’t accurate.

I don’t think it’s necessary or desirable to stop studying men. I think we just need to do complete work in analyzing the data. For example, offering on-site child care benefits women a lot more than men. It can impact breastfeeding. It can impact a woman’s experience of parenting because of the oxytocin or her risk of breast cancer. It’s not going to do that for men. It’s a social intervention. But we need to understand that our lives accumulate and build differences that are not inherent or inherited. They’re created and they always will be.

Healthcare in the US was designed for catastrophic care. It covers catastrophic care much better than comorbidities and chronic diseases. But women have more comorbidities and doctors’ visits. But because we set it up to treat everybody the same, it costs women a lot more out of pocket. We created a formula that rests on the assumption that men and women are the same, even though women’s circumstances, health and life expectancy aren’t the same. Our definition of what is equal and fair is way more expensive for women.

The following was a continuation of the interview Oriana Kraft conducted with Chloe Bird, PhD, senior sociologist at RAND.

Chloe Bird served as senior advisor in the National Institutes of Health’s Office for Research on Women’s Health and editor-in-chief of Women’s Health Issues, where she is now associate editor.

We wanted to close off this interview with a stat: Did you know that investing 26 million dollars in women’s health adds back nearly 40 000 years of full-time employment for both women and men? 40 000 years – can you imagine that? That’s why we need femtech to shine the spotlight on the fact that we need more women’s health research (and a femtech summit like this one to showcase the innovation that’s happening in this burgeoning space). Want to hear more about why investing in women’s health just makes economic sense? Sign up for the Summit here.