The following is a transcript of an interview by Oriana Kraft with Chloe Bird, PhD, senior sociologist at RAND.

Chloe Bird served as senior advisor in the National Institutes of Health’s Office for Research on Women’s Health and editor-in-chief of Women’s Health Issues, where she is now associate editor. 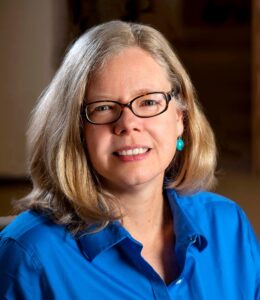 Could you briefly describe the work you do?

I study sex and gender differences in health and healthcare as well as women’s health. I look at differences in the determinants of health and analyze how you get exacerbations between biologically and socially created differences. I look at quality of care in healthcare delivery and how we can make it better. Part of my work involves looking at female specific problems and the lower level of attention that they get in most cases and how those are impacted by biases in the science.

By female specific problems what do you mean exactly?

Health conditions that only affect biological female bodies such as certain reproductive cancers as well as those which disproportionately affect women like rheumatoid arthritis, breast cancer or osteoporosis. Those are all very useful cases for studying what the implications of being an understudied group are. We don’t have any good interventions for men who develop osteoporosis. Developing severe osteoporosis puts you at risk of a hip fracture that is likely to be immediately or long-term fatal.

Those numbers are shocking on their own but I’m curious, why do you think the return on investment is so much larger for rheumatoid arthritis when compared to coronary artery disease?

When you skew what you study and prioritize, relative to the actual burden of the disease, you end up not optimizing what you could be doing in terms of reducing disease and disability. Part of it is we initially prioritized studying life-threatening diseases in men. And then overfit our understanding of those diseases (like coronary artery disease) for what they looked like on men – without understanding very well the way they work in women. As a consequence, our measures of understanding, of diagnosis and treatment – all of our research is on the basis of what we’ve observed and studied in men. But that means we end up missing and not dealing with a lot of the issues that are unique to women. It’s as if you had a Venn diagram. A portion of what we know from our studies on men can definitely be applied to women – but the rest of the circle that doesn’t overlap with men? That’s largely or completely uncharted territory. 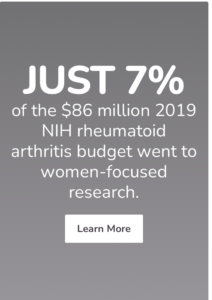 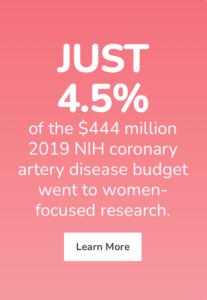 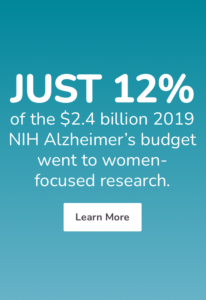 Could you elaborate a bit on why that might be?

The gold standard for studying health is a clinical trial. You want a homogenous enough population where it’s a simple enough condition that you know you’re acting on disease A and not disease B, C, D or E instead. So we tend to study people who only have one condition and aren’t more complicated. So clinical trials skew a little bit younger within the population with the disease. So even if you’re just analyzing what kind of men we’ve actually researched you end up with a Venn diagram between the men you studied and what the male population in the real world looks like who actually have the disease.

It makes total sense when you explain it that way but for a clinical trial you want to isolate and distill what you are studying to the smallest possible variable – so how can we go about fixing the way clinical trials are conducted for them to better reflect women’s medical situations? It seems unlikely that we’ll start studying multiple variables at once even though the medical reality is that women face multiple issues at once.

If we went at it from the perspective of ‘what have we already answered, what is it we know, what is it we don’t know’. If we actually did a topography of the burden of disease and mapped onto it ‘what have we already asked, where have we gotten answers?’ We could start to look at where we haven’t looked. We could start to look at what we need to do to improve population health and that alone could use objective data. That would start to tell us where there are opportunities that we haven’t pursued. Part of what I’m pushing for is the science hasn’t been objective. It isn’t objective. By failing to be responsible for looking at it is that we don’t know we are falling short.

We have these series of assumptions in science. For example, RAND did a systematic review for the Veterans administration. They were interested in knowing: ‘Is there evidence for evidence-based treatment for alcohol and drug abuse disorders?’ When I read the report, it talked about there not being any evidence of sex and gender differences – but it was written up wrong, or at least incompletely.

The systematic ‘not having looked’ is a big problem in science. It influences how we categorize what we know. Logical decisions dictated that we simplify science. But because of hubris we decided that what we learnt from our studies on men was information we could generalize for women, even though we know we got different results in women. We just decided that we got different results because of the menstrual cycle or later onset of disease.

I’m working on a piece on the statistical models we use in medicine. In statistics, we generally say : “here’s how complex the problem is. In all the cases that are simplified to this standard we can do this much simpler statistics. But in order to use simplified statistical models you need to show results that say that your data fits that assumption for the simplified model and acknowledges it’s an assumption. But we haven’t put that standard in place for statistical models in medicine that says: “do you have any evidence that the underlying correlation matrix for male-bodied people and female-bodied female is actually similar enough to justify the use the admitted oversimplification of applying what we learn in men directly to women?” We could raise the bar on science by doing science as science is intended instead of following the familiar short-cuts by saying they’re good.

That’s why we need Femtech. And FemTech Summit’s like this one. Want to hear more about why investing in women’s health just makes economic sense? Sign up for the 2022 femtech conference  here.