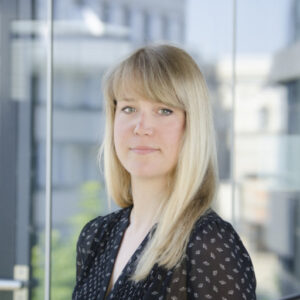 The following is a transcript of an interview by Oriana Kraft withClaudia Barth, PhD,postdoctoral researcher at Diakonhjemmet Hospital and the Norwegian Centre for Mental Disorders Research, University of Oslo.

Hi Claudia! It’s so great to have you here – first off could you give a brief summary of the research you do?

I focus on how hormonal transition periods across the human lifespan impact the brain and mood in healthy women versus women with depression.

So you try to identify whether there are moments in time when women are particularly vulnerable to depression – could you elaborate on that a bit?

We know that women are particularly susceptible to depression during adolescence, post–partum and the transition to menopause when there are intense hormonal fluctuations– but what’s really interesting to study is why woman A develops post partum depression after giving birth, and not woman B? What role do hormones play in it? And what role do these normal hormonal fluctuations stemming from reproductive events play in brain ageing later in life?

Our research has shown that pregnancy, for instance, might have a positive impact on brain ageing. We are still trying to figure out why that might be exactly but we have a couple of hypotheses.

Do you have an example of a hypothesis?

They still need to be tested – but one potential hypothesis is that there are quite extensive changes in inflammatory profiles during pregnancy. For instance, there is an increase in regulatory T cells which suppress inflammation so that the fetus can exist. This upregulation of regulatory T cells may persist in women after birth, which can help to positively arrest immune responses when no longer needed. Ageing is associated with low grade inflammation. So if you have an upregulation of regulatory T cells that may suppress this mechanism, you can imagine that it could be beneficial for brain ageing later in life.

So if we know that women are particularly susceptible during hormonal transitions – do you have an example of how that might trickle down to clinical practice?

The knowledge that women are more vulnerable to mood disturbances during hormonal transitions has been out there for a while. So one easy way to account for it, would be to incorporate it into questionnaires. For instance, trying to ascertain whether a woman’s depressive symptoms are exacerbated pre-menstrually, can inform treatment decisions. Because what’s interesting about reproductive subtypes of depression is that theyseem to be a stable trait. For instance, a woman with a history of premenstrual dysphoric disorder (PMDD, a severe form of premenstrual syndrome)has a greater risk for developing postpartum depression. Simply by knowing that, we can put frameworks in place to educate the partner andalert the midwife, in case this woman plans to get pregnant.

Another example would be that a rocky perimenopausal transition with depression, insomnia and night sweats might give rise to an accelerated neurological decline afterwards. So intervening earlier on, for instance with targeted hormonal therapy,  might improve the woman’s outcome in the long term.

There is also evidence that commonly used antidepressants such as SSRIs (selective serotonin reuptake inhibitors) may work differently by reproductive stage. SSRIs are less effective during menopause, but may act faster in women with PMDD during reproductive years. So really just asking patientssex–specific questions can lead to better quality of care.

And you’ve started looking into how that can be done, right ?

Yes, I’m currently working with a local psychiatry clinic to incorporate pre-written, structured women-specific questions to better inform treatment decisions for women with depression . It’s an easy thing for a clinician to ask (among many other questions):  “Do you use hormonal contraception?” or  “Do you experience any physical or emotional symptoms before onset of menses?”. It is relevant information for assessing potential causes for depressive symptoms and subsequently for improving therapeutic approaches.

I mean, the funny thing when it comes to research is that everyone focuses on precision medicine. It’s such a hyped word, but then a lot of researchers don’t even stratify their study sample by sex. It is a long way to precision medicine if you don’t start there. It doesn’t mean that there are always sex differences between men and women in diseases. But certain conditions might have different implications for men or women. And if you don’t check for it – you’ll never know.

This interview is part 1 of a series of Deep Dives on Sex Specific Topics in Medicine, in the aim of connecting students with research being done in the field.

Research like Claudia Barth’s are why we’re so grateful for FemTech and the light it is shining on the importance of conducting in depth research into women’s health, as well as the unexpected insights it can provide. (And why it’s so great to have a FemTech Summit like this one of course, bringing together researchers, femtech startups and chief clinicians). Want to hear more about the link between hormonal transition periods and female mental health? Sign up for the 2022 femtech conference  here.